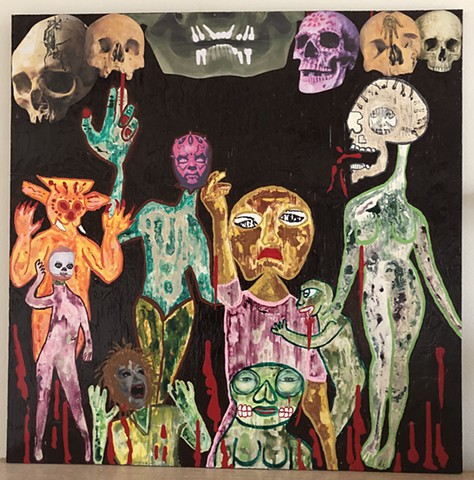 what lies beneath
< previous next >

EXPLANATION OF THE PAINTING:

PURGATORY/HELL- a place or state of suffering inhabited by the souls of sinners who are expiating their sins before going to heaven.

the abode, usually beneath the earth, of the unredeemed dead or the spirits of the damned. In its archaic sense, the term hell refers to the underworld, a deep pit or distant land of shadows where the dead are gathered. From the underworld come dreams, ghosts, and demons, and in its most terrible precincts sinners pay the penalty for their crimes. The underworld is often imagined as a place of punishment rather than merely of darkness and decomposition because of the widespread belief that a moral universe requires judgment and retribution—crime must not pay. More broadly, hell figures in religious cosmologies as the opposite of heaven, the nadir of the cosmos.