we recently returned from a two month trip to asia. we visited china, tibet, nepal, bhutan, india, burma and japan. just us two (not a "tour"), our backpacks and sense of adventure. we have been in burma before, but this time we spent more time in this beautiful country.

we had an amazing time on our trip.

EXPLANATION OF THIS PIECE:

in burma there is the belief among boys and men (and their families) that a tattoo will prevent death from snake bites or being shot by a gun. the tattoo is often the burmese alphabet (in some form). we met a man whose mother tattooed him when he was a young boy. he was subsequently bitten by a snake...and did not die. he attributes this to the protection of the tattoo. he has never been shot by a gun, although he has ventured into some dangerous areas in burma. 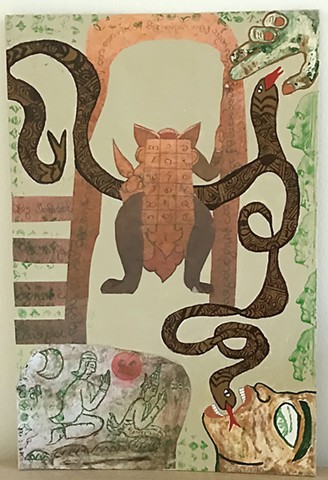